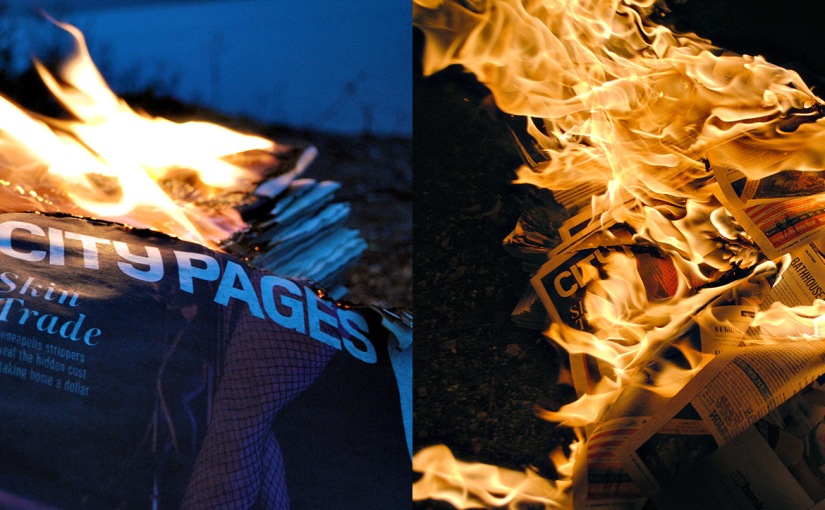 In October 2017 City Pages gave journalist Susan Du the platform to publish a front page article titled “Behind the fantasy at Minneapolis strip clubs”, which “unveils” the workplace struggles of strippers at downtown Minneapolis clubs. The article follows a general increase in coverage about and surveillance of the local sex industry due to the impending Super Bowl and cites a recent University “outreach” project examining “workplace hazards” in strip clubs. In “Behind the fantasy” Du uses unfounded hygienic details about what strippers “bring home from work” as a hook, as well as some horribly degrading and stigmatizing language in parts — calling strippers “flesh merchants” and the stripping industry the “skin trade” in the cover title. If readers are unclear about what stigma is: stigma puts the stripper pole under a microscope even though it is certain that you will find bacteria (“microbugs”) just as you would in your gut and on doorknobs, touchscreens and playgrounds. Stigma is what makes using comments about our hygiene an effective hook — it appeals to people’s pre-existing belief that strippers are dirty and degraded. We feel it is important to note, too, that to focus on the hygiene of sex workers and use language that resembles descriptions of human trafficking (such as “skin trade”) falls into a lineage of eugenicist projects of “social hygiene” that aimed to imprison, reform and sterilize sex workers using claims of their “dirtiness” as well as myths about “white slavery”.

While the rest of the article gestures at solidarity with strippers as workers and attempts to redeem its covert moralizing (and perhaps redeem several other anti-sex work articles that have been featured in City Pages in the last year also) by citing examples of very real workplace struggles and worker organizing, the opportunity for this article to be pro-sex worker was entirely missed. First, much of the solidarity aspect of the article is fabricated by further stigmatizing other forms of sex work (e.g. prostitution). Second, this article presents graphic, sensationalizing details which can easily reinforce negative attitudes toward stripping and paternalistic attitudes toward strippers. Third, by not naming the conditions of misogyny, white supremacy and rape culture that exist everywhere — read: in all workplaces — and which make strippers’ work more challenging and exhausting, this article only further normalizes these conditions.

The same week that “Behind the fantasy” came out City Pages also published a shockingly racist article by the same author titled “Moron gangbanger charged with threatening to kill Minneapolis cop on Facebook”. Calling a black man a “moron” for saying something against the police for being profiled is beyond a misstep, it is an extremely offensive and white supremacist framing of this incredibly tragic turn of events. In a country where black men are regularly killed by police with impunity and imprisoned at astronomical rates, the reality that we live in a white supremacy society is obvious and a headline like this one only reflects that. This kind of over-the-top stigmatizing of so-called criminal behavior is surprisingly uncritical and even beyond the level of most moderate liberal condemnations of “gang activity”. Further, by focusing on the fact that this man may or may not have been gang affiliated, the article entirely misses the real story: we live in a world where you might do 10 years in prison for posting something on Facebook. This level of pervasive surveillance — and the obviously selective, i.e. anti-Black, repression from the state — is far more horrifying and noteworthy than someone expressing their hatred of the forces destroying their life.

City Pages has also published multiple articles that have trivialized obstacles to LGBTQ community organizing in the Twin Cities. One article sensationalized the story of a popular community event being raided by police and another gave platform to a straight City Pages reader to give their opinion that they didn’t think re-opening gay bathhouses would “help anyone”. To not take a stand against homophobic policing and to give a straight person a platform to say what they think about LGBTQ people advocating for taking up space is insulting and harmful.

We are reminded through all this that journalism, like speech, is not neutral or objective: a black man interacting with a racist cop is referred to as a “moron gangbanger” while a white man that made a rape threat to a woman for ignoring him on Tinder is just a “college guy”. The cachet of City Pages as The Alternative paper of the Twin Cities generates expectations in readers that coverage of marginalized issues comes from a progressive perspective. We’ve noticed these mounting instances of conservatism in its pages and hope to see others respond as well.  What is considered “alternative” is not fixed or necessarily counter-hegemonic (as the emergence of the “alt-right” has certainly shown). When coverage under the “alternative” or “progressive” banner bolsters the policing of marginalized people via coded racism, whorephobia or homophobia, it will be challenged.